Learning how to use your camera will save time

To see how Photographer/Filmmaker Philip Bloom did it – CLICK HERE

Tucson Photographers were up early and on Finger Rock Trail, this morning, in the Catalina Mountains. It was beautiful in there after a snow storm passed through. The birds were singing away. Some of the birds spotted were Rock Wren, Orange-crowned Warbler, Lesser Goldfinch, American Kestral, Cooper’s Hawk, Phainopepla, Gila Woodpecker, Ladder-backed Woodpecker, Pyrrhuloxia, Northern Cardinal, and more.

CLICK HERE for a SLIDESHOW of Finger Rock Trail this morning.

Shop from your desk with this treasure map of Copper Country Antiques in Tucson Arizona. 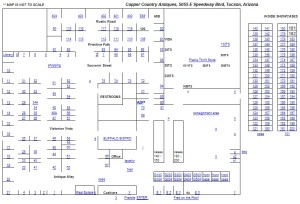 Click on the booth, or case number and it’s just as though you were standing right there in front of it. Pictures are updated often, so check back.

From antique furniture to Zebra rugs, it is packed full of all sorts of interesting things.

It is difficult to give people a long  URL, or web address, when we tell them where to find our photographs. So, we use “domain forwards” to send people to our images. For instance, it is alot easier to tell people to go to TucsonPhoto.us to see a photo, as opposed to www.flickr.com/photos/searchnetmedia. The latter is too hard to remember. TucsonPhoto.us is easy.

So, you can view our weekly uploaded photographs on ArizonaPhotographer.com and TucsonPhoto.us (both easy to remember, huh?).

The Sahuarita Sun reports, “Sahuarita has seat at Washington talks on mines”, and that “Farmers Investment Co. owners Dick Walden (Waldens own 5,000 acres of pecan groves) and Nan Stockholm Walden of Sahuarita and two other local activists attended the hearing and presented senators with an inch-thick set of documents on the proposed Rosemont Copper mine in the Santa Rita Mountains titled, “An Example of the Devastating Impacts of an Antiquated Law in One of the Most Scenic Areas of Arizona.” 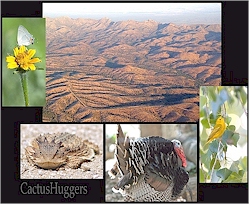 The Sun further stated, “Senators were given a 2008 letter from the Arizona Game and Fish Department to the Forest Service says the mine would virtually destroy wildlife habitat in the northern Santa Rita Mountains, and could jeopardize groundwater supplies in the Santa Cruz Valley for decades.”

Photographs of the of Santa Rita Mountains by Santa Cruz Valley’s own, Murray Bolesta of CactusHuggers Gallery in Tubac, were used as part of effort at US Senate on Tuesday to confront US mining law and the Rosemont situation.

For more information visit these sites:

To benefit the Friends of Buenos Aires National Wildlife Refuge – (click for pics of facilities) and in association with Buenos Aires National Wildlife Refuge “foto fandango” including evening & morning canyon forays and full-moon night photography at the fabulous Brown Canyon Education Center in the shadow of sacred Baboquivari Peak (just west of awesome Arivaca) bring your camera or come with a guitar and harmonica, and just enjoy!

Inside Tucson Business reports, “Is it lights out for Tucson film?”

“The reason that New Mexico is getting the business is because of their attractive film incentives, it can’t be understated,” said Albuquerque film liaison Ann Learner.

“Take away the tax incentives and you all but take away the attention film producers lay to what the state has to offer, said Randy Murry, head of Randy Murry Productions. His company received such a credit for shooting parts of a BBC docudrama series in Arizona.”

Speaking of movies…”Anyone? Anyone? Tax incentives?”  I feel like Ben Stein in the movie Ferris Bueller’s Day Off.

Need a taxi in Bisbee?

Our photo of this taxi in Bisbee, Arizona was fortunate enough to make the featured photo on “Webshots Rides“.

BISBEE, ARIZONA is located in Cochise County, and sits at an elevation of 5,538 feet above sea level. It was named after Judge DeWitt Bisbee, of San Francicso, one of the financiers of the Copper Queen Mine. Phelps Dodge halted mining in Bisbee in 1975, and subsequently sold the mine to Freeport McMoRan Copper & Gold.

It is a great place to visit and take photographs!

We really like this mega zoom point and shoot camera. The Canon PowerShot SX10 IS Digital Camera is easy to use and produces excellent images. Retail price is just under or around $400.

In our opinion, the zoom capabilities and ability to focus sharply while zooming is even better than that of a SLR Canon Rebel XSi EOS with a Canon EF 70-300mm f/4-5.6 IS USM Lens, even though that is a good camera and lens. And the SX10 is a fraction of the price. Its weakness is low light, where the image tends to get “noisy” or grainy, and that is where the SLR Canon Rebel XSi EOS is certainly better.

Though with that said, we still like our SLR Canon Rebel XSi EOS. But for those that want quick nature shots while hiking and don’t want to carry a bulkier SLR camera, we think you will like the Canon PowerShot SX10 IS Digital Camera just as much as we do.  Below is a round-tailed ground squirrel climbing in a mesquite tree in Tucson, Arizona.  They call them “ground” squirrels, because they are not supposed to be in trees.